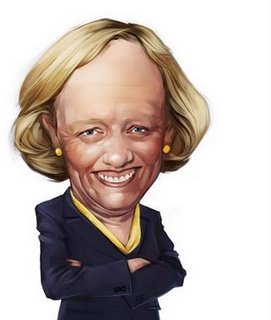 Just so I have this right,

A billionaire who hasn’t voted in 26 years suddenly decides she’s the most qualified to run California.

Immeasurable arrogance aside, let’s pretend for a moment there’s a moral preponderance for civic duty (which to date hasn’t been proven in any way).

Regardless of party affiliation, she’s spending too much of her own money.

Is that a precedent that needs to be set?

Does the state need  to be run by the person with the most money?

Wow, another politician politically dodging questions and futilely attempting to divert the conversation.

The art of modern politics is one part prestidigitation and two parts schmooze.

Question: What is the primary objective of a career politician?

The first taste of power is especially sweet and seductive.  One becomes aware of the potential for personal gain immediately.  So many with so much want to be your friend and give you things.  Isn’t that great?

While it is illegal for corporations to contribute directly to an individual political candidate, is there any doubt that an overwhelming corporate influence exists?  Billions of dollars are spent on lobbying.  Millions of dollars from a specific industry (or company sometimes) make their way to a candidates campaign.  Votes from candidates benefit the industries or companies who donated so generously.  True statements all.

The question is, how can a candidate connect in a substantial financial way with a specific industry or company and remain objective?

The idea behind democracy, as I understand it, is about people collectively deciding what’s best for their communities.

People care about the environment in which they and their families live.

What is the primary objective of a corporation?

If you answered anything other than profit, you’re wrong.

When Ford discovered in pre-production that the design of the gas tank in their “rush to market” Pinto model was flawed, they manufactured it anyway due to an internal “cost-benefit analysis”, which showed that retooling the assembly line would be more expensive than legal fees resulting from wrongful death lawsuits.

They put a price tag on human life, and it didn’t fair that well in their corporate collective wisdom.

I wonder how many of them or their families drove Pinto’s  after the report came out?

The example may be extreme, but it’s also true.  The bottom-line is the bottom-line for any for-profit corporation.  And these corporations have an incredible amount of influence over our political system.

The sad truth is that money is what determines an outcome of an election all too often and the motive behind the money does not always have the country’s best interest at heart.