One Day, as a second grader at Lowell Elementary School in Waterloo, Iowa, a ruckus was brewing as the class was dismissed for recess.  Shouts relayed through the swath of snott-nosed, chest-high playground denizens with phrenitic excitement.

Half the playground stampeded to the front of school to witness it’s newest enrollees.  I made my way over after the initial rush, curious about the hubbub, and saw a black mom and her two black children enter the school office.  Was that it? Didn’t seem like a big deal to me, but like the newest members of our south-end of town population, I was in the minority.

African-Americans lived in Waterloo, but were segregated to the north-end of town. There hadn’t been a black family at Lowell, and the reaction to their presence was nothing short of educational.  That was my introduction to racism and prejudice.

Small clicks of kids made horrible scary statements I hadn’t heard before.  Our newest Lowell brethren were left alone at playtime, except for me.  I’d already been the object of ridicule, being literally the first kid to wear bell-bottoms at school (not my choice) and hanging out with my friend Kim who was taunted and teased daily.  Kim wasn’t a popular boy’s name in 1968 Iowa.  I hadn’t yet given in to peer pressure, hell, I didn’t even know what that was.  Besides, we moved around alot in the early days so I wasn’t beholden to any long-term friendships yet.

I played with my new found friends because I liked them.  Kids are cruel, but the playing field is pretty even in the second grade.  If you’re encouraged to think for yourself, you’re miles ahead of the pack.

My parents were Jazz musicians.  Mom sang with Benny Goodman on a tour that included Ella Fitzgerald, Lionel Hampton and Hank Jones, along with many equally talented white musicians.  Frequent rehearsals at the house brought people of all sizes, colors and temperament into my consciousness, but differentiation was never based on race, it was solely on the content of their personality.

Being white growing up in the sixties with no attitudinal predisposition towards race proved to be enlightening and infuriating.  Because of my parents, I had the good fortune to decide for myself about this issue in particular, because my parents treated everyone like people.  Crazy, right?  Presumptive predication based on race, religion or politics was absent from my formative years allowing me the freedom to decide for myself.

As a white person growing up in America in the 60’s and 70’s you were exposed to n-word jokes, period.  Sometimes in hushed tones when people of color were in earshot, other times loud and clear as if it were a challenge, but always derogatory with the malodorous stench of underlying hate.

I may not be an expert in human psychology, but after decades in the hospitality industry, managing behavior on a larger scale, I’ve come to learn how to read a face and translate one’s vocabulary and inflection.  Couple that with my experience as a fundamentally unbiased anonymous observer in the American white culture, I know how to recognize racism, and the bad news is that this country is rife with hate-filled ignorance and intolerance.  It’s getting better, but it’s still present.

For years, the issue had been relatively buried, unless you regularly visited the Southern Poverty Law Center website, where they track hate groups. But the 2008 Presidential Election changed all that.  I think racists were caught with their pants down, because they never in a million years would believe a black man could be elected president of the United States of America.  To illustrate, check this stat from Compete.com on Stormfront.org: 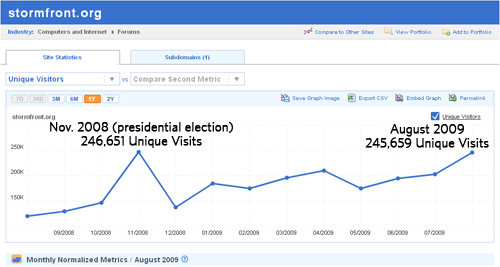 Stormfront is a white supremacist website.  Members of Stormfront would correct me here and describe themselves as white nationalists, but c’mon.  Semantics aside, all you need do is browse through the site.  As you can see, the traffic spiked in November, 08′ when Barack Obama won the White House and has slowly increased, reaching near November (2008) levels this August (2009).  My guess is September will surpass last November (I’ll try to remember to update). Similar traffic spikes were recorded on kkk.com, kkk.bz, kkklan.com, etcetera, etcetera.

As predicted, web traffic increased substantially in September for stormfront.org in the month of September:

Bubbling to the Surface in 2009

In high school I dated a girl who originally hailed from Mississippi.  She told me she was afraid of black people. “What are you afraid of?”, I’d ask.  “That they’ll take over”, she answered.  “Take over what?”, I inquired.  “Take over the country”.

To the feeble minded, that’s what this is about.  Reading through the mangled, incomplete and frighteningly evil thought processes displayed by some of the posters on stormfront, it becomes very apparent that a streak of disbelief, hate and paranoia has grappled the short and curlies of these confederate sympathizers.

As of this writing, President Barack Obama has been in office for a little over 8 months.  His appointees are multi-cultural.  Mr. Obama won the popular vote of the citizens of this great country, in addition to an overwhelming advantage in the electoral college.  Republicans and former Bush appointees serve on his cabinet.  President Obama has repeatedly sought bi-partisan support and central to his victorious campaign was the idea that we as a nation could achieve our mutually beneficial objective through cooperation and intelligent discussion.

Unfortunately for us, there are biggots who have enough money to sabotage the progress we’re making.

One need only google Rush Limbaugh racist quotes, and 462k results appear.  Mr. Limbaugh has made  millions of dollars defiling his fellow man.  But Rushbo is an entertainer, a clown, the motive behind anything he says is advertiser dollars.

A more complicated case is Rep. Joe Wilson. Joe has apologized to the  President, and has been politically backpedaling since his disrespectful outburst on Sept. 9th, 2009.  But he’s a politician.  He’ll say whatever.  Joe is a member of the “Sons of Confederate Veterans”.  Joe was one of only 7 state representatives in the state of South Carolina to defend the confederate flag.

The confederate flag is the defining symbol of the confederacy.  The core belief of the confederacy, the motivation behind secession of the states involved and the civil war was the right to keep indentured servants.  To own human beings as a commodity.  To treat human beings as a possession, like a cell phone.   How much effort do you expend when you lose your cell phone? As much as your child? As much as a close friend?

Defending the confederate flag is like flipping off Abraham Lincoln, John F. Kennedy, Martin Luther King and human decency. There’s simply no place for it in intelligent society.

The white supremacists, separatists, nationalists or whatever want segregation.  Good luck. Segregation from what?  We all inhabit the same shrinking planet.  We all depend on the same resources and all have the same needs.  Go ahead and create your own putrid colony, but you’ll eventually have needs that supersede your resources.  Then what?

I don’t understand it.  When I break it down to it’s lowest common denominator, where’s the benefit in that position?

What would be the logical progression of secession or racial segregation?  Which state in the union is completely self-sufficient?  How long after splitting our gloriously diversified and interdependent nation into multiple individual nations  would war erupt?  How many wars would there be, and who gets the tanks?

And let’s face facts, if you found yourself in a life threatening situation, and at that precise moment if there were only one person in the world who could save your life, would it matter what color they were?

One reply on “In Hate We Trust”