The Chilling Invasion of Privacy Personified by Big Brother in George Orwell’s 1984 Frightened and Enraged Us. Why? 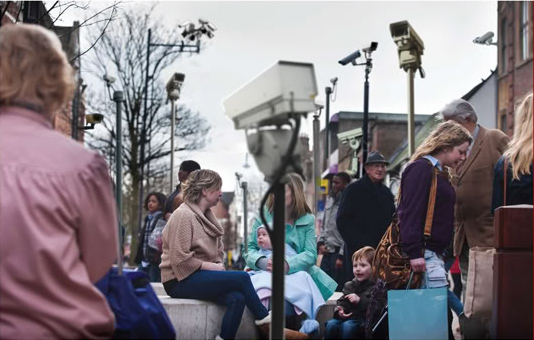 Clearly, having telephone or internet communications intercepted and reviewed without your knowledge or consent assails personal liberty.  But what about the millions of surveillance cameras?   An article in The Independent|UK projected that the average Briton is caught on camera 300 times a day, most times without their knowledge.

In 2002 ABC’s Sunday Morning reported that New Yorker Bill Brown conducted walking tours of surveillance cameras around Times Square every Sunday.  He had counted as many as 200 in Times Square, and as many as 5,000 he mapped in New York City as a whole. 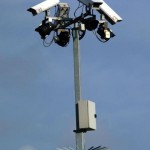 Caltrans in California provides a large selection of cameras to assist in our daily commutes, along with it’s counterpart New York City DOT in New York.  Many cities around the world have similar setups.  You can also check out webcams around the world at sites like EarthCam and 123cam.  Additionally, there are a multitude of surveillance cams at department stores, convenience stores, gas stations, parking lots, commercial office buildings, restaurants, etc. And that doesn’t even count satellites.  Expect numerous opportunities per day that your ugly mug is appearing on someone’s monitor, so smile.

The objective of the surveillance camera is supposedly to make us safer, to inhibit crime.  A 2008 ACLU Report concluded that video surveillance has “little to no positive impact on crime”.  But the introduction of the report states that while American cities and towns are investing millions in surveillance camera systems, “few are closely examining the costs and benefits over time.”

They may have no impact on crime rates, however they have surely helped in apprehending perpetrators.  How many times on the news have you seen disturbing video footage of a crime in action?  Criminals have been identified through the use of these cameras.  Did it stop the crime or financial loss? No.  But in many cases, it did help remove one more punk from the streets.

The ACLU report also states that calculating the effect of surveillance cameras on crime and the crime rate is very complicated with an exceptional number of variables.

As is my habit, among many others that are less productive, is a practice of breaking down a situation to it’s lowest common denominator.  Historically, when did crimes rates begin to spike?  Parsing that data accurately could literally take months, so for my example I’ll use the homicide trend in the U.S. between 1900 and 2004:

Wars, the Great Depression and high unemployment account for major spikes in the chart above.  But from a purely theoretical point of view, I believe it’s caused by the continued fragmentation and splintering of the family unit.

The early human race was a smattering of tribes which evolved into small villages and towns.  The makeup of these communities were essentially a group of families banded together for a common cause, survival.  In those days, what would you imagine the crime rate would be?  Everybody literally knew everybody.  You didn’t have graffiti because people in town would recognize your handwriting.  You couldn’t sneak around at night because somebody would hear you.  If you were acting suspicious somebody would call you on it and you couldn’t steal anything because everybody knew what you had.

In the last hundred years especially, families have grown further apart.  There was no anonymous in your town in the beginning, but as the anonymous population grew, so went the crime rate.  Certainly there is a myriad of other factors, but is there one more important or effectual than that?

People in large cities have a problem with small towns because they feel like there’s no real privacy.  Is that it, or have we just become too accustomed to hiding stuff?

I’m not afraid of big brother, I don’t care if there’s 300 cameras on every street corner, I just want my kids to feel safe when they walk home from school.  In fact, I think local cable stations should broadcast the feeds from as many different locations as possible.  You want to check if you’re teenage daughter actually went to the movies with her girlfriends? Turn it on channel 1036 when the show is supposed to be getting out.

Our police force can’t be everywhere, they don’t have the resources to monitor every street corner, but what if each neighborhood watch group could assign their members time slots to keep an eye on things by turning on their local neighborhood watch channel?  Wouldn’t you be able to recognize a suspicious vehicle or persons creeping up your street?

If you’re out in public you’re going to be seen by anyone on the street, any window you stroll by and any car that passes you.  So what’s the difference between that and adding a couple of cameras?  And what are you doing, or planning to do, that concerns you so much about it?

Bring on the cameras and let’s all watch each other on TV.  It’ll be just like the old days.